Innovation in technology has enabled us to increase the level of comfort in our daily lives exponentially. Small inventions give rise to essential revolutions in technology and adapting this innovation into our lives helps to improve its quality. We all treasure our comfort and privacy which impels us to use numerous techniques to ensure it.

Glass partitions, doors and windows act as favorable options for selective privacy. We tend to use transparent glass as window panes and partitions where monitoring or mentoring is required whereas different levels of opaque glasses used in places where discreteness and privacy are needed. That takes care of our need for privacy, as is necessary according to the location.

On the other hand, our comfort level indoors is another aspect which has benefited with innovations in technology. It is common knowledge that regulating indoor temperatures at in an optimal manner not only helps to make it comfortable for the occupants inside but it also takes the significant strain off of your indoor air conditioning system too. There are several new types of glasses available which tend to help a little when it comes to maintaining indoor temperatures effectively and also ensure protection against the harmful UV (ultraviolet) rays which is present generally in the sunlight.

However, as efficiency is one of the leading factors when it comes to human innovation, your standard glass window pane or partition can either be transparent or be opaque in nature. As for your anti-UV glass panes, these also tend to come in a set level of transparency.

So what if there was a way to integrate the best aspects of both of these products and ensure selective privacy and also ensure complete control over the indoor climate control simultaneously? It is possible with the invention of the switchable film.

What is Switchable Film?

A switchable film also called as PDLC (Polymer Dispersed Liquid Crystal) film, smart glass and even smart film, allows users to control its transparency and opacity levels, with a simple flick of a switch or a button on a remote control. Typically, the switchable film is in a translucent state but changes it opacity level till it is entirely transparent. Thus, users can easily control the level of not only the light which can pass through the window pane, or glass door panel, from outside but in effect also control the indoor temperature level to a significant extent.

A smart film may look simplistic but is, in fact, a product of real ingenuity. The innovation of the switchable glass was possible with the integration of photochromic, electrochromic, micro-blind, suspended-particle and polymer-dispersed liquid crystal technologies.

As the liquid crystals are not adaptive to the polymer, upon the curing or solidification of the polymer, the individual liquid crystal particles from droplets around them. The type of polymer curing method and the period of curing, decide the operating range of the particular switchable film.

Usually, this film of PDLC-polymer is sandwiched precisely between two sheets of transparent fiber or float glass. These sheets will have a film of a transparent conductive coating in the inner side which is in contact with the PDLC film. That works as a capacitor for the smart glass.

Next, the complete PDLC-glass pane will have two electrodes attached to it which connected to a regular power supply. In a normal state, when no electric current is passing through the smart glass, the film and the glass are in a translucent and opaque state (milky white) as the liquid crystals within the polymer arranged randomly. These haphazardly-arranged liquid crystal particles prevent light (and heat) from passing through.

However, when an electric voltage applied through the electrodes the liquid crystal particles within the polymer arrange themselves automatically into a symmetrical arrangement, which results in the light (and heat) to pass through the smart glass easily.

A lower voltage passing through the smart glass will only result in a few of the suspended liquid crystal droplets to get arranged uniformly, and a higher level of electric energy through it will cause increasing numbers of suspended liquid crystal particles to take an aligned position. That allows you to control the opacity/transparency level of the switchable film by controlling the amount of voltage passing through it.

Now, with a simple pressing a button on the remote control, you can easily control the amount of light which you wish to pass through the window and inadvertently protect yourself against harmful UV radiation present in the sunlight. 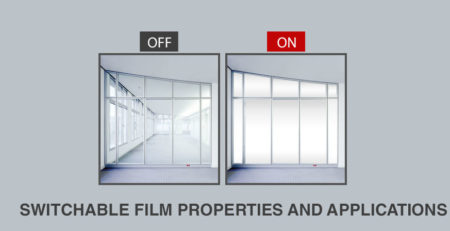 The switchable film is one of the best ways to ensure privacy when you wish, at home or... read more
BULK ORDERBLOG